The Victorian ‘Drunkard’s’ and the Millennial’s Spending Habits

The enduring preoccupation with money is proliferated in numerous articles that we are bombarded with on social media and in the press. What is striking about some of the titles in The British Workman is that they could be interchangeable for articles written today. For example, ‘Take Care of the Pence and the Pounds Will Take Care of Themselves’ mirrors the dominant discussion about the spending habits of young working people. These articles perpetuate the notion that millennials are financially irresponsible in the same way that people who spent their money on beer. 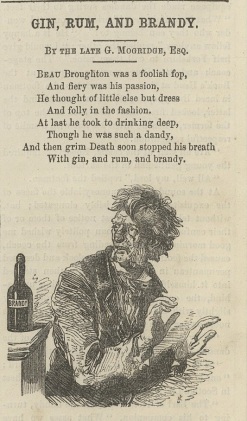 The assertion that “People are more tempted to extravagance in small than in great matters” was published in 1864 but would be applicable in any modern article about how millennials spend their money. The crackdown in the press on the apparent millennial indulgence in everything from coffee, sandwiches and avocados, mirrors the nineteenth-century temperance movement. The British Workman frequently warns of the dangers of drinking for the underpinning reasons that it damaged the identity of the honest working husband, it was financially negligent, and ultimately damaged ability to work. The attitudes presented in both current press and in the British Workman are underpinned by the theme of workplace security.

The British Workman promotes the values of ‘honest’ work, and ‘sensible’ living to combat the inherently ambiguous world of work. Articles that flippantly discuss millennial spending and saving habits, with titles such as ‘This is why millennials can’t have nice things (or save any money)’ , are disconnected from the day- to-day realities of casualised low-paid labour. Articles in similar vein that proclaim millennials do not have the work ethic of the baby boomer perpetuate the idea that millennials struggle for success simply because they don’t work as hard. These generalisations dismiss the inherent inequalities that graduates face which studies have demonstrated are a concrete reality. Articles that condemn the millennials’ work ethic provide far too simple a solution to a complex process of entering the world of work and they ultimately dilute the complexity and uncertainty of finding a place that if it doesn’t reward you with money, at least works for you.

Read next: Ambition and Adversity: John the Scullion and ‘Multi-career women’

We're also here to support you with Ask Alumni, our global virtual @UniofGreenwich community. Connect with alumni from all around the world, broaden your networks and seek & provide support through a range of career-focused activities. Join or sign in 👉 crowd.in/fg5XLE pic.twitter.com/yKVF…

Important update from the university regarding the national lockdown. Please see below for more info on what help is available to you and what changes we're making to adapt to the current situation. crowd.in/8gVNwc

(2/2) ...your studies safely. You should have received an email today with the latest information and we’ll be able to share more details this week as we get further updates from the government. Stay safe and take care: gov.uk/coronavirus pic.twitter.com/OdMQ…

(1/2) After last night’s announcement that we will enter a national lockdown, universities have been asked to move the majority of teaching online until at least mid-February. We want to reassure you that we’re working hard behind the scenes to ensure you can join or return to...

We hope you're all enjoying a well deserved break. Just a reminder that there are plenty of resources you can still access during the holidays. From wellbeing support to academic support. find out more here 👉 crowd.in/XEPPsK

Merry Christmas Everyone! Cover of Typographia magazine, December 1920. Thank goodness Santa knew that the one thing we wanted under the tree is our very own printing press! pic.twitter.com/d9z4…

Season's greetings to all our alumni, supporters and friends of @UniofGreenwich. Wherever you are, we hope you're staying safe and enjoying a deserved break #SeasonsGREetings pic.twitter.com/cESt…

Merry Christmas from all of us here at the University of Greenwich! ❄️🎅🎄 We hope you all have a wonderful day! Throwing it back to a snowy campus 😍 #MerryChristmas pic.twitter.com/YKJG…

Warmest wishes to all, today and for 2021. Stay well x pic.twitter.com/nzTS…

Who can resist "an illustrated monthly journal for Conjurors, Concert Artistes, and all Entertainers"? Not us, clearly! pic.twitter.com/ZBnd…

Christmas greetings to all our followers- and especially the wonderful schools that participated in our competition this year. We hope we'll be able to run an extended version in 2021! In the meantime, here is a taste of a future digitisation project! pic.twitter.com/JfTI…

Our first lecture of 2021 is being held on Zoom on 14 January. Ten creatives will be sharing their stories of how St Bride has inspired them from getting inky in our print workshop or getting lost in the stacks in the Library... sbf.org.uk/whats-on/… The speakers are... pic.twitter.com/zvAQ…

The Sir William Boreman's Foundation supports young people in Greenwich & Lewisham. Grants of up to £3k may be awarded & to be considered, they must receive your application 3 weeks before the panel meets on 2 Feb/25 May. Read more and apply 👉 gre.ac.uk/bursaries/… pic.twitter.com/MxKI…