The subject of internships and acquiring experience is very relevant in the evolving world of work. With an even more competitive job market, and degrees not being enough on their own to secure “graduate work”, gaining experience through internships is vital. Who then more appropriate than an intern to ask about their response to the ‘millennial’ in the media and their reflections upon work?

These informal interviews, along with the constant discussion I have with peers and colleagues about work, have informed and shaped this series of blogposts. It’s therefore worthwhile recounting the general themes that we discussed in a bit more detail. 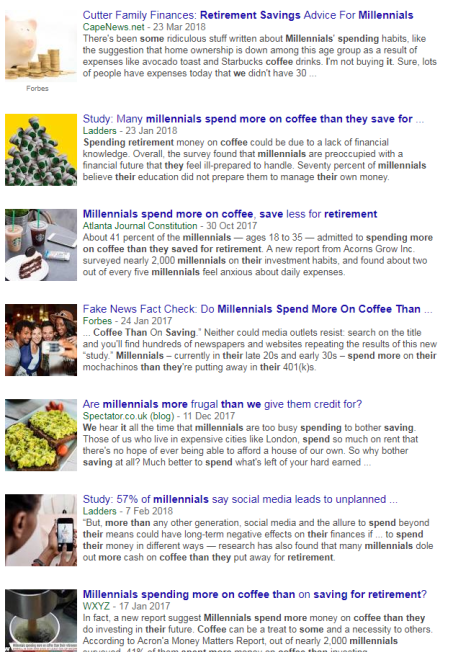 The overall response from my fellow interns was that the current press about the ‘millennial’ was negative. In the sweeping generalisations, and in the shock-factor headlines (some of which I read out to them), the press doesn’t particularly shed a positive light on our experience.

“Do Millennials Spend More On Coffee Than They Save For Retirement?”

One intern characterised the use of the ‘millennial’ in the press as a scapegoating term. They suggested by using it and exaggerating our experiences the press uses ‘millennials’ to account for difficulties in work. If an older generation have insecurities about the changing world of work, the ‘millennial’ could be utilised as the source of this upheaval. It therefore makes sense that the experiences of the ‘baby boomer’ and the ‘millennial’ are exaggerated and accounts for the plethora of articles that detail the implications of their differing work ethics. Since the subject of work ethic was a contingency that linked the Victorian and discussion of work today, I focused on this theme in the blog-posts.

The press on the differences in the worlds of work of the millennial and baby boomer is however not always negative. Many articles praise the millennial for their assumed conscientious and collaborative style of work. Despite this, in a world of provocative headlines, the response was that it was understandably very easy to focus on the negative assertions about the ‘millennial workforce’, rather than how they will influence positive change in styles of work.

“5 Ways Millennials Will Transform The Workplace In 2018”

In asking how we would define ambition and what does ambition mean to you, the overall response from my interviewees was less specific and more orientated around a desire for stability. This comes as no surprise considering the constant press that informs us of our generations’ lack of it in the world of work. Work can be an integral part of forming our own self-identity, the idea perpetuated on social media that the world of work is precarious can in turn influence what we want from work.

On the question of role models for work, responses were equally subjective from my fellow interns. The British Workman’s repeated focus on utilising role models for work was an area I wanted to explore further. Most people I discussed this with concluded that young people don’t necessarily have role models that are specific to a career. Role models come in every shape and form, from our family, friends, as well as public figures from actors to authors.  Although there are many articles that list pioneering women in work, and frequent discussion of how these women juggle career and family, it was not necessarily these women that my fellow women interns identified with.

When I asked what their motivations to work were, the answers – and answering the question ‑ is far more complicated than first assumed. It is perhaps easier to explain what kind of work you are pursuing, but even breaking this down is hard. When the world of work is so inherent to life, the subtext of work and the underlying motivations to get up every day are overlooked. How do we address something so obligatory to the way we live our lives? Through investigating the continuities in the way we talk about work in the press in these blog-posts I aimed to address how significant work is to our lives and how we define ourselves.

Founded in 1848 by John Cassell, publishing imprint Cassell & Company still exists today. In the 1890s the popularity of Japanese art had reached its peak in the West, as reflected in the design and binding of this piece. The bill of fare is very English. pic.twitter.com/GGdx…

We are proud to tell your stories and share your memories of @UniofGreenwich . Explore our growing collection of Greenwich Snapshots and our award-winning Greenwich Portraits and if you feel inspired, share your story with us 👉 alumni.gre.ac.uk/you… pic.twitter.com/pO8B…

This is a fantastic initiative (& my Dad's 'bog train' sculpture at the beautiful Lough Boora park in Offaly is nicely featured in the video!) twitter.com/cathmart…

Look what I just received 😍😍😍 5 volumes from the Key Popular Women Writers series (EER Publishing) ed. @Janine_Hatter & @HelenaIfill ! Thanks so much once more for awarding me the Greta Depledge PGR Prize @VPFA1 😊🙏🙏 I look forward to reading them! #VPFAInclusion pic.twitter.com/NEJZ…

We invite you, dear #SHARP2021 @MovingTexts2021 delegates, to enter The Ullapoolism Time Machine, and from thence to travel to the past and to the future of the history of the book… Weds 28 July 10.30am CEST Don’t be late! BRING LIPSTICK! @Beth_driscoll @SHARPorg @SHARPorgNews

In the "meet the editors" of "Book History" session, @gbarnhisel @bethlrx Yuri Cowan explaining that they love to hear from grad students and ECRs about their research, and like to help guide them through the publication process #MovingTexts2021

It's less than a month to go until the @beardsleyism decadent birthday event of the year, with talks by @Kate_Hext and Margaret Stetz! Don't miss this fantastic celebration of the one and only Aubrey Beardsley, organized in association with @DecadentStudies and @BirkbeckC19 🥳🎂 twitter.com/beardsle…

Yet more @BL_MadeDigital 19thC newspaper gems are appearing on @BNArchive - The Planet, The Political Letter, The Porcupine, The People's Paper - and that's just the Ps blog.britishnewspape… pic.twitter.com/1Dam…

"As soon as I walked around @UniofGreenwich, I had a good feeling & knew it was where I wanted to study." Brad Cole (BA Primary Education, 2019) is now a teacher & credits his lecturers for providing the support to help him thrive. Discover his story 👉 crowd.in/u0iznh pic.twitter.com/BwXn…

Announcing a Call for Editors for the Complete Works of Margaret Cavendish. Full poster attached -- you can also read more info here: forms.gle/yXbazmsy6L… or let us know you're interested here: digitalcavendish.org… by Sept. 1. Feel free to share widely! pic.twitter.com/QAUV…

We’re hosting our first in-person and live streamed event on 3 August with the brilliant Bob Richardson for one of his highly anticipated ‘Inside St Bride’ lectures. He’ll be sharing some of the hidden treasures in the St Bride collection. For more info > billetto.co.uk/e/ins… pic.twitter.com/u9Jl…

We had a great time & great feedback from our first students of 2021 on our Adana course. There's still time to sign up to our 3 day Letterpress Summer School nxt week! Mick and the gang will be there to show you the ways of the press and get inky. Tickets shorturl.at/bqTX7 pic.twitter.com/PqR5…

Eight books published in 2020 are shortlisted for @SHARPorg ‘s prize for the best book in #bookhistory . Thread by @w758 , winner announced next week at the annual meeting. twitter.com/w758/sta…

Carved into the very fabric of Café Nero in Long Acre is evidence of a former occupant. Craske, Vaus and Crampton, were process engravers to the printing trade. The permanence of their 3D lettering means it has survived where painted signs were long extinguished. pic.twitter.com/yhFW…

Good and sobering thread on libraries and climate change. Maybe a panel for @sharpamsterdam 2022? twitter.com/MacResCo…